The Brain in Recovery

Science has come a long way in helping us understand the way the brain changes in addiction.  In this section, we will provide updates of current research on addiction, recovery, and the brain.

First, a few key points to understand about the brain and addiction.

Some characteristics of addiction are similar to other chronic diseases. Just as cardiovascular disease damages the heart and changes its functioning, addiction changes the brain and impairs the way it works. Below is an image of the brain (left) and the heart (right).

These images show how scientists can use imaging technology to measure functioning of the brain and heart. Greater activity is shown in reds and yellows, and reduced activity is shown in blues and purples.  Both the healthy brain and the healthy heart show greater activity than the diseased brain and heart, because both addiction and heart disease cause changes in function. In drug addiction, the frontal cortex in particular shows less activity. This is the part of the brain associated with judgment and decision-making (NIDA).

Addiction is similar to other chronic diseases in the following ways:

The brain can experience ‘pleasure’ from all sorts of things we like to do in life; eat a piece of cake, have a sexual encounter, play a video game. The way the brain signals pleasure is through the release of a neurotransmitter (a chemical messenger) called dopamine into the nucleus accumbens, the brain’s ‘pleasure center.’ This is generally a good thing; it ensures that people will seek out things needed for survival. But, drugs of misuse such as nicotine, alcohol, and heroin also cause the release of dopamine in the nucleus accumbens, and in some cases, these drugs cause much more dopamine release than ‘natural,’ non-drug rewards.

Below is a picture (helpguide.org) of the brain and the nucleus accumbens, in addition to some other brain regions that are affected by addition. 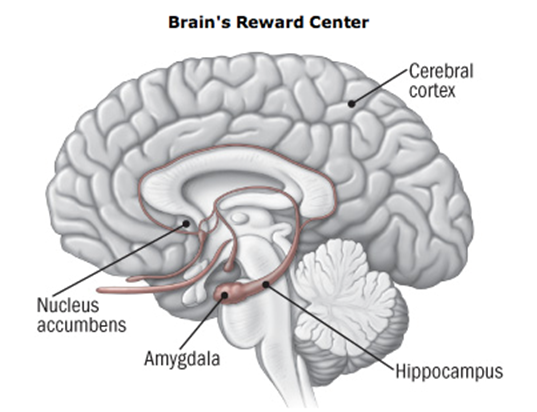 And, here is a picture from our own research of the brain activated by alcohol (Gilman et al., 2008).  The nucleus accumbens is activated.

Addictive drugs can provide a “shortcut” to the brain’s reward system by flooding the nucleus accumbens with dopamine. And, addictive drugs can release two to 10 times the amount of dopamine that natural rewards do, and they do it more quickly and more reliably (helpguide.org).

Over time, drugs become less rewarding, and “craving” for the drug takes over…

Over time, the brain adapts to the effects of the drug (an effect known as tolerance), and because of these brain adaptations, dopamine has less impact. People who develop an addiction find that the drug no longer gives them as much pleasure as it used to, and that they have to take greater amounts of the drug more frequently to feel high. There is a distinction between liking and wanting the drug; in time, the ‘liking’ decreases and the ‘wanting’ increases. Over time, people use the drug simply to feel “normal.” They continue to seek and take drugs despite the tremendous problems caused for themselves and their loved ones.

The Brain Can Recover- but it Takes Time!!

How the brain recovers from addiction is an exciting and emerging area of research.  There is evidence that the brain does recover; in the image below shows the healthy brain on the left, and the brain of a patient who misused methamphetamine in the center and the right. In the center, after one month of abstinence, the brain looks quite different than the healthy brain; however, after 14 months of abstinence, the dopamine transporter levels (DAT) in the reward region of the brain (an indicator of dopamine system function) return to nearly normal (Volkow et al., 2001). 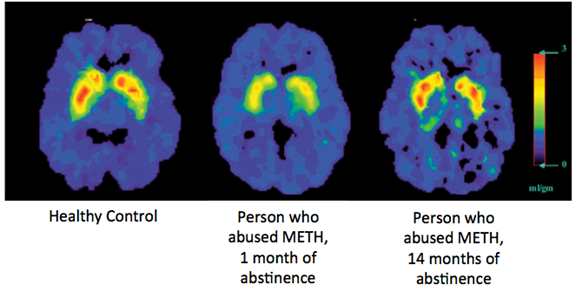 All info above from Recovery Research Institute
Powered by